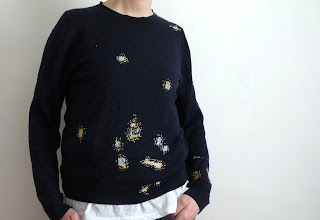 The exhibition aims to explore ideas around mending, after a year of building renovation and repair at the hall itself. From the curator:
"While the stonework within the Hall was being mended - quite invisibly - we became interested in repair which did the opposite. We started looking for examples of mending which were visible and actually made a feature of wear and tear. We discovered that with textile items, repair can be storytelling, creative and commemorative. It can add something extra and bring new meaning and emotion to an object. It can tell us more about people, history, memories and lives."

The artefacts exhibited in ...by a thread... all display thoughtful and careful repairs, and include Karen Suzuki’s rescued teddy, Jacy Wall’s Japanase boro jacket, David Worsley’s darned jeans, Angela Maddock’s repaired Wrangler jacket and Jenni Steele’s 1930s nurse’s apron, along with Claire Wellesley-Smith’s Japanese boro bloomers and Coreen Cottam’s family quilt. Each comes with a story written by the lender, explaining why the process and act of repair is significant to them.

About Blue Jumper
I consider Blue Jumper, a heavily darned navy blue jumper, to be a performative artwork that I wear and work on. I found it in pristine condition, in a charity shop off Old Street, London, now Blue Jumper is heavily darned yet still worn. As environmentalist I am anti-waste, and I wear only second-hand wool. When moths ate Blue Jumper, I continued wearing it.

This garment can be considered disobedient, and it certainly has a disobedient wearer. Repairing is both “obedient” to my own “reason or conviction (autonomous obedience)” of being anti-waste and pro-circularity, and disobedient to those of our consumer culture, where “obedience to a person, institution or power (heteronomous obedience) is submission” (Fromm 1981, p19). My stitched intervention displays my politics: my slogan not shouted but darned. Blue Jumper is personal, political, active and rebellious.

Arguably our dominant culture is what Erich Fromm describes as having - with principles around ownership, gains and growth. To repair together (I began the darning on this jumper with tomofholland, simultaneously beginning our friendship) is to push back (that act of obedience/disobedience) against capitalist consumerism and embrace Fromm’s mode of being – “to share, to give, to sacrifice - that owes its strength to the specific conditions of human existence and the inherent need to overcome ones isolation by oneness with others” (1984, p108).

I find myself resilient against pressure to buy new: I can, I will, I am, through choice and necessity, wearing, repairing and re-wearing. In celebration of resistance and autonomy, like Plutarch’s Ship of Theseus, I will keep repairing Blue Jumper until all is repair, and beyond.