Reimagining the Collection: A Large Box of Loose Parts

An excerpt of this text has been published in 'A Narrative of Progress: The Camberwell ILEA Collection', a catalogue accompanying the exhibition of the same name at Camberwell Space from 18th September to 27th October 2018. More info here 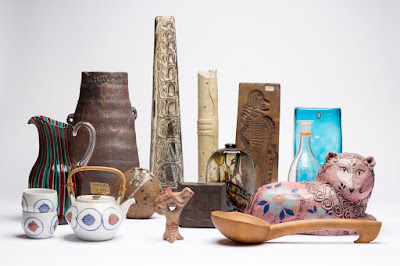 Due to historic damage, loss of material, or degradation, selected objects were deaccessioned (formally removed)(1) from the Camberwell ILEA Collection. Despite this, there is still much that can be learnt from their material properties, functions and stories. Here Camberwell students and staff have reimagined select deaccessioned objects in their own style, inspired and informed by the collection while maintaining the originals integrity.

COLLECTED
The Camberwell ILEA Collection relies on its Curator’s knowledge to maintain its relevance, to be subjective in the best interests of the collection. Deaccessioning requires great knowledge - of what is best for the collection and for its users, of what will maintain its significance and what might muddy it. To uncollect is a big responsibility.

Brian Thill suggests that ‘for waste to be meaningful as a concept, we must be able to comprehend some manner of relationship between the waste object and its discarders’ (2). Something seen by the Curator meant that these objects, though deaccessioned, did not become waste. Instead they were passed to another who recognised significance and potential in them, as raw material rather than ended objects. 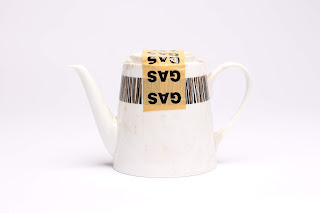 DISPOSED
The deaccessioned objects include parts (lids, bases, unidentified pieces), whole but damaged objects, fabric and paper pieces too far gone to be safe to use, and a couple of objects which have reimagined themselves (the yellow plate). In the unstable moment of disposal, they became ‘loose parts’, and their large box an environment where ‘inventiveness and creativity, and the possibility for discovery, are directly proportional to the number and kind of variables in it'. (3)

Studios, although often full of variables related to discipline (tools and materials, bits and pieces), could be considered ‘static and impossible to play around with’ rooms full of familiar stuff. An attempt has been made here to throw loose parts into our studio practices, to see the objects afresh, and to shape some making around them.

SALVAGED
While considering the significance and history of the collection, and materials and processes embodied by the objects, they have been changed in dynamic, and perhaps irreversible ways. Words such as complete, repair, manipulate, narrative and agency have been uttered.

These ‘objects in transit’ (4) have been (re)made into something familiar, tangible or knowable, and the skill is not just in the making itself, but also in the respect paid to the original (perhaps unknown) maker. The (re)makers were asked to consider biographies (real or imagined) of these often mass-manufactured objects, and think about conservation and patina, to step away from multiplicities or duplications, in order to create unique recrafted objects, simultaneously elevating the original maker back in to the picture.

The relationship between collecting, disposal and salvage, is complex and tensioned, as are ideas of value associated with machine-made and hand-made objects, known and unknown makers. The Camberwell ILEA Collection was designed for exploring - for attempting to understand these tensions. Loose parts are inherently in it, waiting to be picked up, tuned over, handled.

The (re)makers were asked to colour outside the lines of the original, but not to obscure what was there before. This is not the ‘self-effacing nature of repair’(5), or the radical change of recycling. Walter Benjamin suggests that ‘the here and now of the original constitute the abstract idea of its genuineness’(6). These reimagined objects, having been twice made, contain the here and now of the original and that of the new original making, further abstracting ideas of genuineness. They have avoided the trashcan, yet remind us of the existence of it.

The acts of (re)making here, akin to the Camberwell ILEA Collection itself, and the interests of the Curator, teeter in a space between respect for the past and interest in the future. What could be considered a plethora of remnants has been examined in a different context, as raw material, albeit steeped in cultural history, to re-situate them as parts, no longer loose.

5) Adamson, G. (2015) From Me To You: A Personal Account of Craft Curation. pp64-81 in Documents on Contemporary Crafts, no. 3: Crafting Exhibitions. Norwegian Crafts, Norway p71